This page is for anyone who doesn’t blog but would like to share nature images, stories, comments or observations. If you would like to post here please read the T+C’s bit attached to this page and if that’s all OK email your picture(s) and text to me and I will post them here within the following few days.

The week before last there was much excitement when a snake appeared in the lobby at the place where I work. Unfortunately I wasn’t on hand to assist in the identification and the capture or our interloper. But Simon, our facilities manager, had the presence of mind to take a photograph of it before ushering it into a box and releasing it outside in the undergrowth, and he was kind enough to give me a copy to share with you. 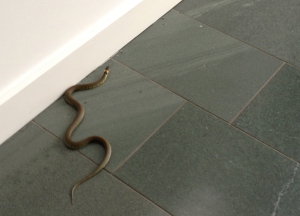 The snake turned out to be a grass snake, Natrix natrix, they live near water and feed predominantly on frogs and other amphibians. They are one of two resident serpents in the UK, the other being the venomous adder, but the grass snake is non-venomous but can produce an unpleasantly pungent secretion to deter predators.

We all had the utmost respect for the snake because it managed to negotiate the revolving door to get into the building, a feat which has  baffled many human visitors!

My good friend and correspondent on The Naturephile, Robert, emailed me a few days ago after I posted about marsh harriers at RSPB Titchwell in Norfolk, and shared two photographs that his friend, Eden, had taken after inadvertently flushing a northern harrier:

It looks as though it had been busy securing a meal and was otherwise engaged and failed to notice the presence of a human! Consequently Eden got very, very close to what I guess is probably an otherwise elusive bird, hence this great shot of the harrier clutching a small rodent in its talons.

I think this picture is absolutely remarkable, the detail on the underwing, and the eye, and the talons grasping the prey are superb!

So thanks to Robert for sending the images and Eden for taking them and allowing me to share them here.

After my failed attempts to photograph adders a couple of weeks ago at Danbury Common, Chris has seen several this weekend and sent me a picture of one along with a common lizard:

In Chris’s words: “2 hours of patiently waiting for this little guy to sit in the right place finally paid off”.

This amazing looking ‘blackbird’ has been seen by my friend, Ross, around his work place in Melbourne near Cambridge, and photographed by Ross’s colleague, Paul, who generously allowed me to publish it here. It’s not an albino where an animal is totally lacking in the single pigment, melanin, but is ‘leucistic‘ which is a condition caused by failure of pigment cells to fully differentiate. That can lead to partial or total loss of pigmentation, but in this case the head and eye are still almost normal. I don’t know if there are any other physiological ramifications of this condition and I don’t know if it can affect a boys chances with the ladies, but I imagine it would render a normally dark coloured bird more susceptible to detection by predators such as sparrowhawks.