The most spectacular natural phenomenon to occur over the New Year period was, in my opinion, the partial eclipse on the morning of Tuesday 4th January. It commenced before daybreak in the orient and by the time the sun rose in the UK it was well underway. A very early-morning glance through the curtains in Histon suggested the cloud cover would scupper any attempts to view it from here. The eclipse was due to complete around 9.30am and with an immense stroke of good fortune the clouds parted to reveal a blazing sun low in the eastern sky at 9.05 so I ran around the house trying to find a suitable eye shield to view it through. Grabbing the chance of a breakfast time chocolate feast my daughter suggested cellophane wrappers peeled from some leftover Christmas confectionery, a stroke of genius on two levels. Alas, by the time there were sufficient to enable safe viewing, the image was so blurred as to be useless. So I rapidly retrieved some old photographic negatives from the attic and several  layers of these provided an excellent filter for the purpose. We saw the partially occluded sun and I even managed to fire off a couple of photographs, so here’s the best one: 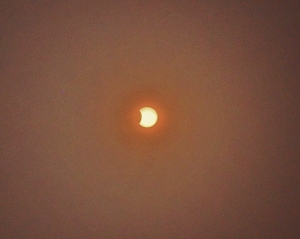 Partial solar eclipse at 9.15am on Tuesday 4th
January 2011 from Cambridge UK.

In terms of wildlife there have been a few highlights in the last week. I spent most of my walking time around Guns Lane and Abbey Farm north of Histon and the field to the west of the Lane, lying between it and Abbey Farm, known locally as ‘Rowleys Meadow’, is turning out to be a real treasure trove. A pair of kestrels (Falco tinnunculus) are in residence, usually found in the top of a tree which appeared in my ‘Guns Lane‘ post from the end of November last year.

Kestrel pair are regularly seen at the top of this particular
tree. The top one is a male and the lower individual a female.

A buzzard (Buteo buteo) has also been in the vicinity at least since New Years Day when it flew low over the meadow heading east and was spotted again on the 3rd perched in a tree further north along the Lane. I spent several minutes slowly working my way along the hedge to get into position for a photograph when a pair of  mountain bikes coming the other way flushed it out. I’ll have to wait for my shot of a perching buzzard.

The most exciting encounter with a bird prey occurred on New Years Day whilst heading back from walking the dog in the Histon Fields. An orchard opposite my house has been home to flocks of redwing (Turdus iliacus) and fieldfare (Turdus  pilaris) for most of the Christmas holiday. Approaching home at the end of our walk  a female sparrowhawk (Accipiter nisus) approached at very high speed around 8 feet from the ground entering the orchard like a feathery Exocet! To be followed a split second later by a chorus of alarm calls as what seemed like hundreds of redwing scattered in all directions. I couldn’t see if she was rewarded with a meal.

Bullfinch (Pyrrhula pyrrhula) continue to maintain a presence on the lane, three individuals consisting of two males and a female provided a splash of colour in the tree tops on a grey day last week, and I flushed out a pair low down from a hedge further along the Lane. Flocks of long tailed tits (Aegithalos caudatus) are often chasing each other along the hedge and several days ago were accompanied by either a goldcrest (Regulus regulus) or firecrest (Regulus ignicapilla).  It was most likely a goldcrest as firecrest are considerably more scarce and goldcrest are often found amongst flocks of tits. It was too close to focus binoculars on and the light was too murky to see the colours properly, so I couldn’t confirm the identity, but I’ll be keeping my eyes peeled in the hope of seeing it again.

Other species I see on most of my trips along the lane include a pair of green woodpecker (Picus viridis) , song thrush (Turdus philomelus), mistle thrush (Turdus viscivorus), redwing, fielfare and blackbird (Turdus merula)- five Turdus species which on several occasions have all been in the meadow at the same time. 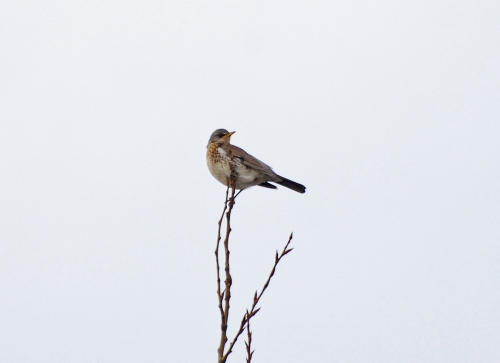 Fieldfare in the top of a tree on Guns Lane

Waxwing (Bombycilla garrulus) continue to grace us with there presence. I’ve had a report from a colleague of a flock feeding on rowan berries on Kings Hedges Road, Cambridge, and my sister told me of a ‘treefull’ she’d spotted in a supermarket carpark in Kettering. Although a quick look in Garden Walk in Histon, where I saw them last week, suggested they may have moved on as there were none around and the trees and bushes had been virtually stripped clean of berries.

The heron (Ardea cinerea) is spotted around the north of Histon on a frequent basis, flying over and perched on numerous rooves including one behind my house which just happens to have a fishpond in the garden:

Grey heron sizing up a fishpond for an early morning raid in Normanton Way, Histon

It has some primary flight feathers missing on its left wing identifying it as the same one I posted about previously, feeding on pollock in my friends garden, then tapping on his window to ask for more.

Another friend of mine has reported sightings of blackcap (Sylvia atricapilla) and redpoll (Carduelis cabaret) in his garden in the last couple of weeks too. So there is a splendid variety of birdlife of all shapes and sizes to be seen now in a garden near you.

Posted in Astronomy, Birds, Walks around Cambridge and Histon