In my last post I showed you some pictures of some minibeasts I was cohabiting with in the summer last year. As the post title indicated, I don’t mind providing board and lodging for those little guys.

But every winter, and often through the summer too, I put seed and nuts out to feed the birds, and I always put some in a tray feeder and also on the ground so the smaller ground feeders don’t get bullied off the food by flocks of noisy squabbling starlings like this one: 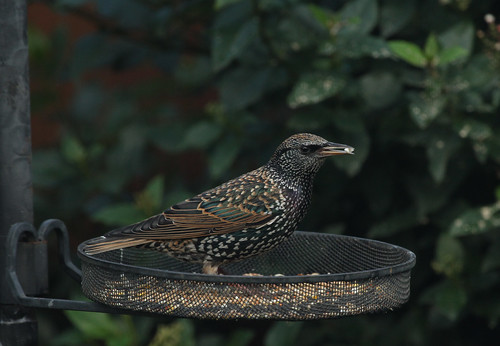 I welcome all creatures to stop by for a nibble in the depths of winter because I think how miserable I’d be if it was me out there in the freezing cold with no food. And until a couple of weeks ago the only non-avian guests I’d entertained were the occasional mouse and the even more occasional squirrel.

But then last week I spotted this little chap poking his head out from under the bush adjacent to the bird feeder: 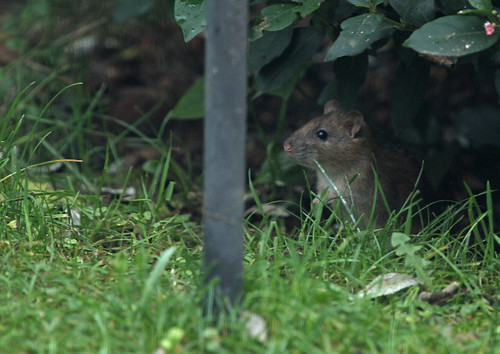 I know that rats can be a problem when there are too many of them in the wrong place, but I have a lot of respect for a creature which seems to me to be the ultimate survivor, I reckon ratty will be around long after humans have killed themselves off! Consequently, even though he is less welcome than my invertebrate visitors, I’m not going to panic and call for the rat catcher or put traps and poison out to try and kill him. 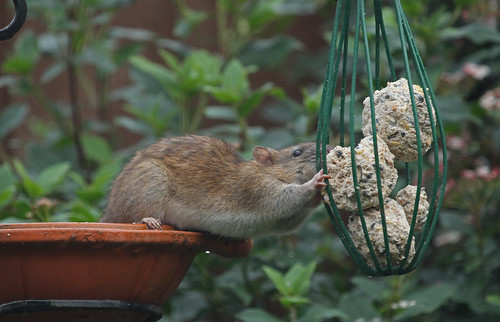 As I watched, he scurried out from under the  bush and shinned up the metal pole with the bird feeders on and helped himself to a nibble at the fat balls. Now I reckon any creature that has the brains and the balls to do that deserves a little sustenance as reward for his skill and ingenuity. So fair play to him.

I know there are no rats living in the immediate vicinity of my house, and I only ever see them occasionally and one at a time, so unless he moves in and brings his family I’m content to let him scavenge the occasional nut or seed.

13 responses to “A less welcome guest”