Not long after my lunchtime spin around Cambridge Science Park I paid a visit to Milton Country Park which is about a mile from where I work, as the crow flies. Wild flowers were everywhere, the sun was out, and there was lots to see including a family of treecreepers (Certhia familiaris, Dansk: træløber). Prior to this I’ve only seen treecreepers individually but this time a whole family of at least five birds was flitting around a tree trunk before flying to an adjacent tree. Treecreepers are fun to watch, they begin hunting low down on a tree trunk and climb up it in a spiral pattern to ensure they don’t miss any insects lurking in the crevices of the bark, they are very aptly named. I didn’t have my long lens with me so I couldn’t get any photographs of the treecreepers, but I did capture some gorgeous flowers on this outing:

I’ve never noticed scarlet pimpernel (Anagallis arvensis) growing around Cambridge before but I’ll be happy if it spreads. The flowers, which were less than a centimetre across, open in the morning and close mid afternoon and were shooting from amongst the short grass. It’s common in England but less so in Scotland.

The purple and yellow flowers of the woody nightshade flowers (Solanum dulcamara) were illuminating the undergrowth:

The flowers of the woody nightshade are beautiful and eventually give way to berries which are green before they ripen into a lovely deep red colour. As the colour may suggest they are toxic, the main ingredient being an alkaloid called ‘solanine‘ (an alkaloid is a plant-derived nitrogen containing compound which can exert a physiological effect on humans. More infamous members of this category include opium, cocaine and marijuana). 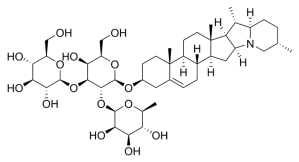 Solanine is also the active ingredient in deadly nightshade, Atropa belladonna, and is the compound which makes green potatoes toxic! The green pigmentation is due to chlorophyll which is produced when potato tubers become exposed to light and is not therefore toxic, but it is produced along with solanine. Solanine isn’t degraded by cooking so eating lots of green spuds is a bad idea.

As you might expect, solanine has physiological properties which make it a useful compound. Ancient Greeks would take it before consulting the priestess Pythia, the Oracle of Delphi, to utillise its halucinogenic properties. And Italian ladies used the sap of the deadly nightshade in days of yore to dilate their pupils as they believed this made them more beautiful. Hence the specific name of the deadly nightshade ‘belladonna‘ (‘beautiful lady‘ in Italian). It was also used by torturers as a medieval truth drug to extract confessions. In more recent and enlightened times therapeutic doses have been used to treat a range of conditions incuding inflammatory eye diseases such as uveitis, and it has also shown inhibitory properties when applied to melanoma (skin cancer) cells. It’s amazing stuff!

A frog hopped across the path in front of me and hunkered down in the undergrowth to avoid being spotted and/or predated, so I got up close to capture some portraits. I was within 8-12 inches and it didn’t flinch, so I took half a dozen pictures before it hopped off deeper into the bush.

At the edge of a lake a stand of rosebay willowherb was just coming into flower. The flower spikes and leaves of willowherb have been used to treat grumbly bowels and apparently it makes a good mouthwash too. The willowherb was interspersed with spears of aarons rod:

This aarons rod was a very fresh example and was only just coming into flower but when in full bloom the spear is full of yellow flowers from the leaves to the apex. They have been lining my route to work since June and there are still some hardy individuals lingering on into the autumn. Aarons rod has been used medicinally as an expectorant to treat coughs and for numerous other conditions including colic, eczema, boils and warts. It’s a very versatile plant.

Many shrubs and bushes were festooned with the flowers of tufted vetch which is a European native and has also been introduced to the Americas where it is a weed. The flower heads were several inches long and a rather fetching blue/purple colour. It grows over other plants by shooting out tendrils which grasp stems and provide an anchor for further encroachment. It can grow up to 2m tall and can strangle smaller plants. But the flowers are lovely