We took our annual holiday two years running at Shanklin on the Isle of Wight, and one thing I noticed during the first visit was that there were ravens on the cliff face behind the beach at Shanklin. As I didn’t manage to take any close-up photographs of them on the first visit I resolved to try a bit harder the second time around.

Then one afternoon I found myself on the seafront with the kids and the usual gulls were wheeling and squawking in the air: 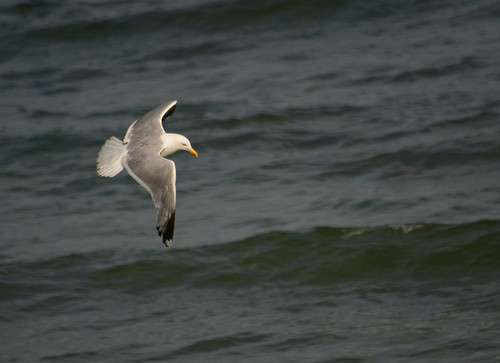 I like herring gulls, their shrieking call is reminiscent of fun-filled childhood trips to the seaside. And it makes me laugh how easily they overcome their natural fear of humans and come right up close to try to scrounge a chip.

And another gull which frequents the coasts of the UK, but which I see more of on the fields inland is the black headed gull: 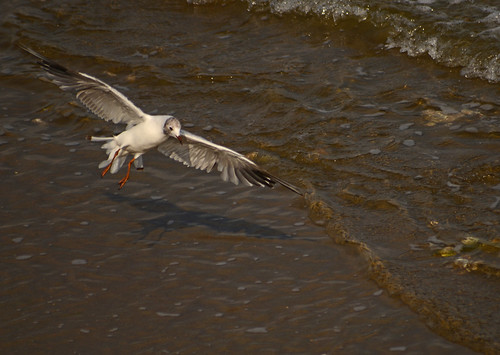 Black headed gull, Chroicocephalus ridibundus (Dansk: hættemåge) – undercarriage down for a landing on the beach 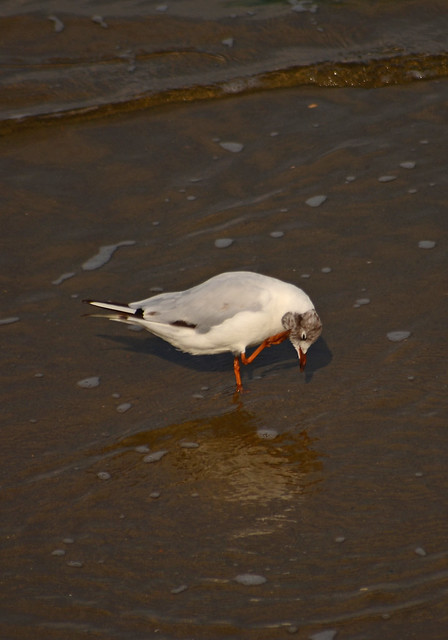 And while the gulls were doing their thing I noticed a big black shape on the cliffs a few hundred metres away which I thought could be a raven. So I chivvied the kids along the beach to get closer and sure enough it was indeed a raven. It flew down from the cliffs onto the beach and landed around 30-40m away but as I was of the opinion that ravens would be like the other crows, not terribly comfortable being in close proximity to humans, I gathered the children close and told them to be calm. But as we stood and watched it strolled down the beach towards us and didn’t appear to be remotely fazed by our presence, or for that matter, anyone elses: 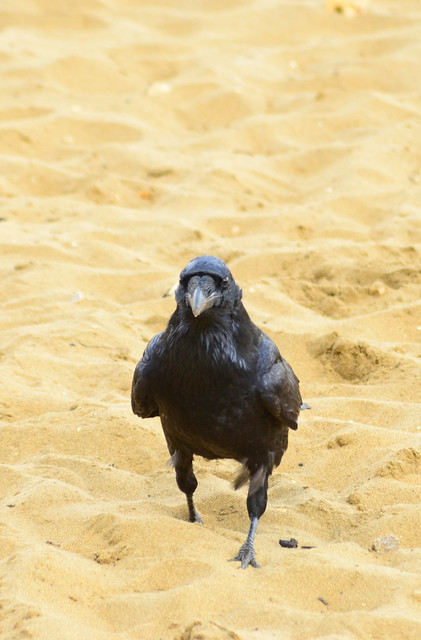 He strolled on past with a purposeful gait and what struck me was the size of him. Ravens are huge! I’d read before that they are the size of buzzards and seeing one this close it’s easy to see they really are. 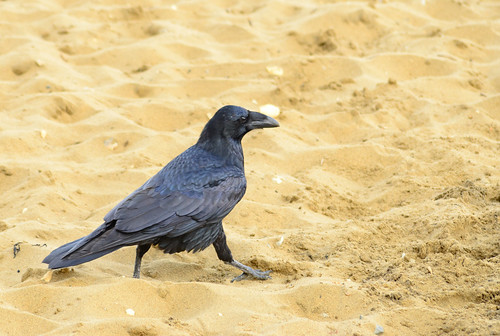 So for comparison, an obliging rook posed in the background, and even though the rook is 5-10m further away the size difference is stark. There’s no confusing this chap for any other type of corvid! 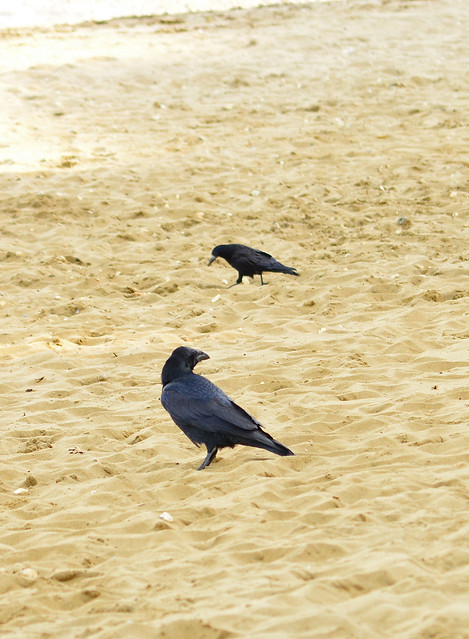 And the reason the raven was behaving as bold as brass was that it was on a mission to examine the contants of a litter bin for a late afternoon snack: 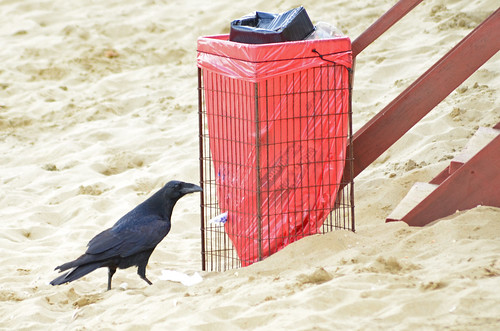 First it made a small incision with its powerful beak – one of natures tools that’s magnificently fit for purpose. Once access was gained, it proceeded to extract the contents through this hole and snaffle up all the pieces of food jettisoned by that afternoons beach goers: 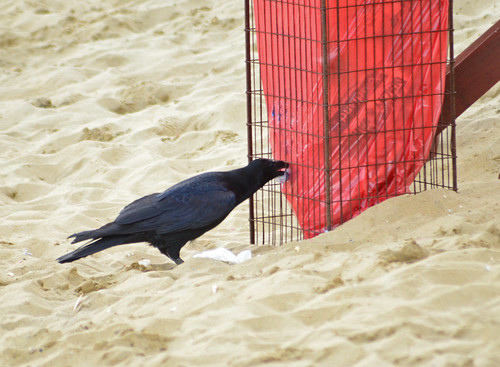 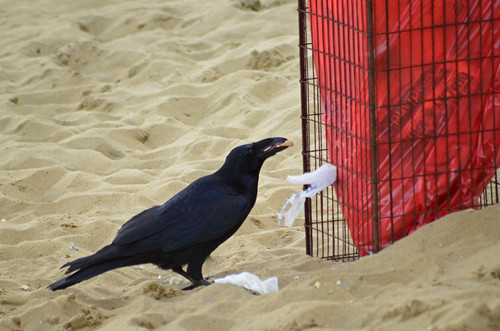 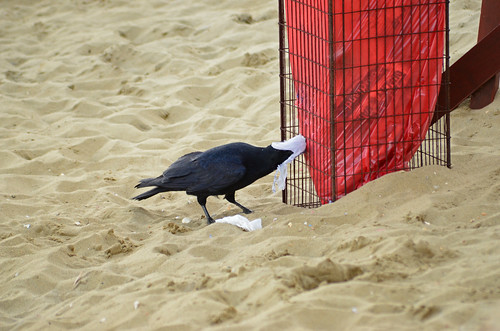 When I left it was still emptying the bin and was only distracted once when a large group of noisy folk walked right past, but he just hopped away a few metres and waited for them to pass before burying his head inside the bin once more to continue the meal.

I really like this series of shots because it shows a spectacular and enigmatic bird being incredibly resourceful, and it’s the first time I manage to get really close to a raven. 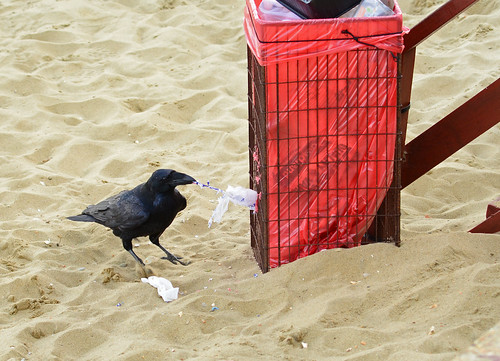 Some years ago I went kayaking in the Johnson Strait between British Columbia and the Canadian mainland to see orcas, and while I was there I learnt a bit about the indigenous people of that region, the Haida indians. As with many indigenous folk, they had a conservation minded and mystical relationship with their environment because their very survival depended entirely on the forests and oceans and the inhabitants thereof.

And one of the creatures they held in particular reverence was the raven. A modern day Haida called Bill Reid has written a book consisting of a series of short stories based around the orca, the eagle, the bear and of course, the raven, all from Haida legend going back centuries to a time before Europeans intervened and ruined everything. If you ever stumble across a copy buy it and enjoy it, it’s called ‘The Raven Steals the Light’ (ISBN 1-55054-481-0).

The Isle of Wight, Part 1

This summers holiday took myself and the family to the Isle of Wight. I’ve often sat on the mainland and gazed at the island wondering what it was like, but apart from a sailing weekend from Cowes some years ago I’d never been there. Prior to the trip, several folk I spoke to who had been there said, ‘It’s very nice, but very 1950’s’, implying that were a bad thing. I wasn’t entirely sure what it meant, so I set off expecting bakelite telephones, knobbly knee competitions and casual racism. But the reality was nothing like that, in fact the Isle of Wight turned out to be a lovely place, very green and full of cool wildlife.

Shanklin Bay looking over the garden of out holiday abode

Within a day of arriving at our destination at Shanklin, on the southeast corner of the island, we’d encountered a pair of ravens who were keen to share our fish and chips on the seafront, and several red squirrels running around the trees in the garden below our apartment. Red squirrels are delightful creatures and the island is one of the few places in the UK where they haven’t been ousted by the bigger and more aggressive North American grey squirrel. Unfortunately I wasn’t able to get photographs of these but there was plenty of other flora and fauna to keep me occupied.

The weather on the island during the first week in August was remarkable, it was hot and sunny virtually the whole time we were there, but that coincided with continuous heavy rain and big floods a short distance to the west in Devon and Cornwall. As well as the trees in the garden, there were flowers and butterflies basking in the glorious sunshine:

The wild pansy is a lovely little flower and has been used as a herbal remedy for eczema and asthma and it was believed it was good for the heart, hence its other name of ‘heartsease’. It’s laden with potentially beneficial chemicals including salicylates (aspirin), antibacterials and antiinflammatories and has many amusing common names such as ‘love lies bleeding’ (!), bullweed, ‘tickle my fancy’ and ‘love in idleness’.

Also frequenting the garden was the equally beautifully coloured, but less poetically named, gatekeeper butterfly (Pyronia tithonus). I was pleased to see lots of butterflies here because the dreadful spring weather meant I’d seen very few around Cambridge, a horrid situation which, alas, prevailed for the rest of the summer.

Below the garden at the bottom of the cliff was lots and lots of beach with lots and lots of birds, including the ravens I mentioned earlier. And amongst them was this gull youngster. It wasn’t at all fazed by me and my son running around and seemed more curious than nervous.

Alas, I’m not sufficiently knowledgeable about gulls to be able to differentiate the first year herring gull (Larus argentatus, Dansk: Sølvmåge) from the lesser black backed gull (Larus fuscus, Dansk: sildemåge), even with my Collins bird guide to assist. And while the gull was peering at us a sandwich tern patrolled the shallows occasionally diving into the water:

Sometimes returning to the surface with a fish… and other times not:

From our limited explorations around the island it seemed to be quite distinctly in two halves. The eastern end, where we were based was green and agricultural with wide sandy beaches, and the western end, at least on the south side, was more chalk down rising to imposing cliffs toward the Needles at the far western tip. All the photographs in this post were from in and around Shanklin in the east and I’ve divided the IoW into two posts, so ‘Part 2’ will be from the western end.