Winter’s on the way

I can tell when winter is on the way because the bird population in my garden changes to reflect the season. A coupe of weeks ago a flock of long tailed tits passed through, the first one this side of the summer, then this weekend the garden was so full of birds I had to refill the seed feeders.

The one species which, when I first see it, confirms the imminent descent into winter chiiliness is the coal tit (Periparus ater, Dansk: sortmejse): 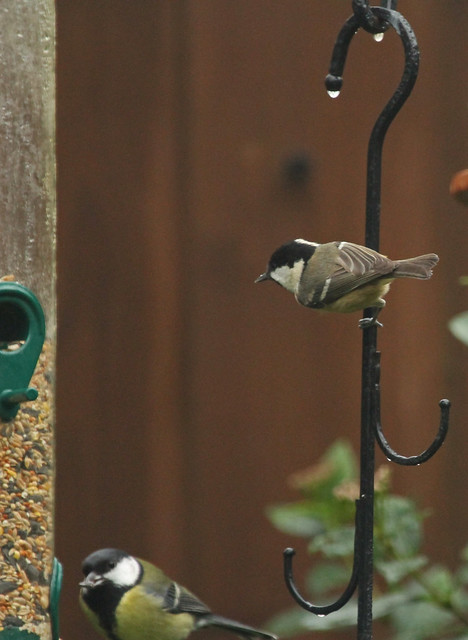 Coal tits can be tricky to photograph because they don’t stay still in the open for very long at all. And on top of that, the weather last weekend was foul: cold, grey mist, murky and damp with very little natural light. So I wound up the ISO to 3200 in order to allow me to get a suitable shutter speed and crossed my fingers that it would work. And I was pleasantly surprised by some of the results: 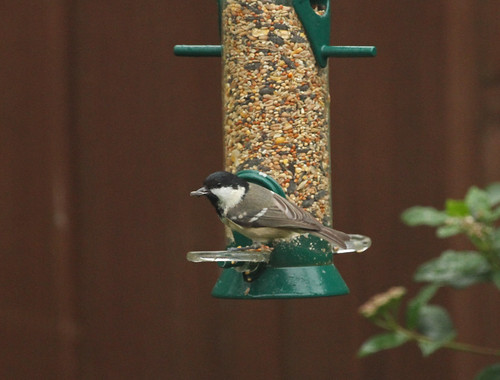 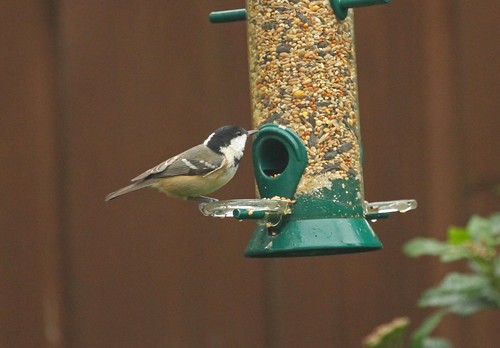 The coal tits flit rapidly and cautiously onto the feeder, grab a seed and immediately make a beeline for the adjacent buddleia bush to shell it and consume the contents under cover. It’s a small bird, about the size of a blue tit, but it has a black head with a white stripe up the nape and is pale rufous brown underneath, so it’s immediately distinguishable from it’s more prevalent cousin. 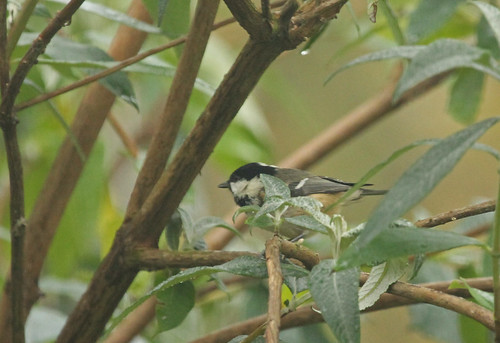 It’s not unusual to see blue tits all year round but the coal tit feeds mainly on conifers, so as there are no conifers in or around my garden, it only ventures in when the harsher weather of the approaching winter necessitates it.

And of course, the blue tits were here too: 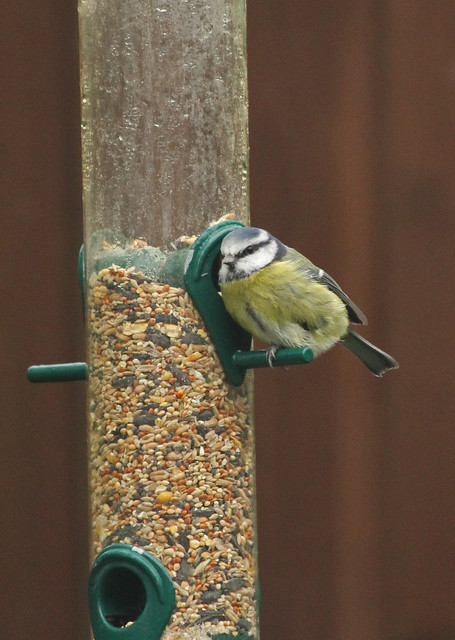 My resident dunnock was on parade, present and correct, I like the pose in this image and even in the shabby light conditions the colours stand out. I think the dunnock is the archetypal ‘LBJ’ or ‘little brown job’, but you can see here that it’s much more than that! 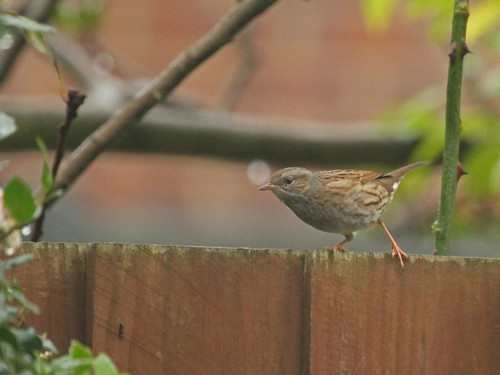 The Danish name for the dunnock is ‘jernspurv‘ which tranlates as ‘iron sparrow‘ which I think is a very apt name.

The third member of the tit family that visited on Saturday was the great tit which is our largest. It’s probably the most frequent garden visitor too, at least in my garden, or maybe just the most visible one: 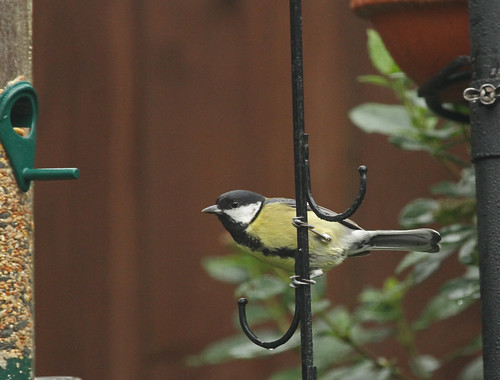 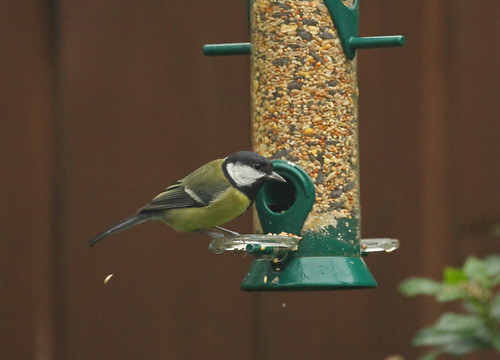 This great tit is female, the black stripe on her underside is narrow and short compared to that of the male which is longer and stretches from one leg to the other at the bottom of the abdomen. I think the one below is a male but I didn’t get a good enough view of its nethers to be sure. He has what looks like a parasite on his face next to his eye and I wondered how that was affecting him. He seemed to be feeding and flying OK, but the next day he was back and he was wobbly in flight and actually flew into the wall of my shed, so it appears to be affecting his vision or balance, or both. So I reckon he could become a meal for the local sparrowhawk before too long. Nature is beautiful but brutal! 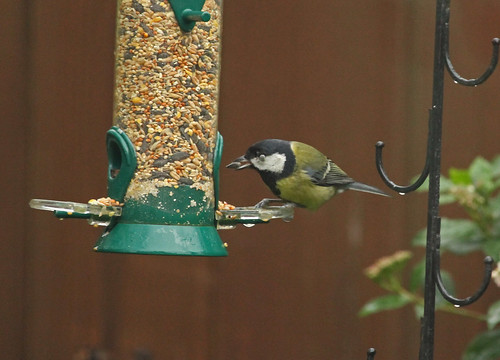 Whilst all the tit activity was going on on the feeders a wood pigeon alighted on the shed awaiting an opportinity to grab some seed from the tray feeder. Last week the hanging feeder was emptied in a couple of days, which is unheard of, and when I watched I saw the wood pigeon was standing on the tray feeder from where it emptied the hanging one in record time. One wood pigeon can hold a phenomenal amount of seed and it also means the small birds get less of a look in, so I rearranged the hanging one so the pigeon can  no longer reach it. (I also scatter nuts and seeds on the ground for the pigeons so they don’t starve). 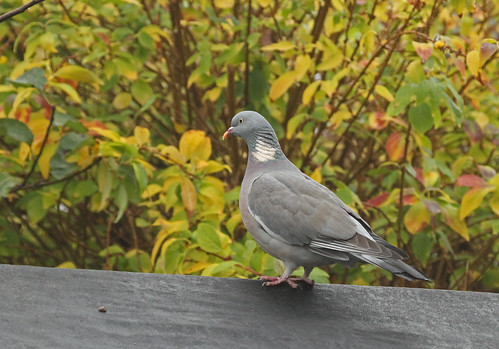 And the last bird I managed to get a picture of was the ever present robin. I love this little chap, it’s always there raising Cain with the dunnocks and brightening up even the greyest day. 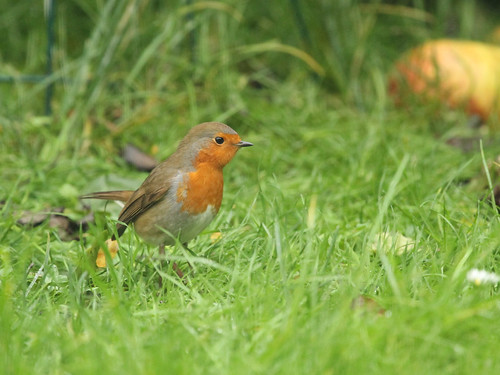 Chaffinch, blackbird and wren all put in appearances as well, but I didn’t manage to get pictures of them and I’m looking forward to seeing which other species pay me a visit over the cold winter months.

10 responses to “Winter’s on the way”