A once in a lifetime opportunity

This post is a diversion from my regular posts about the biological side of nature and this time I’m delving into the more fundamental aspects of physical nature.

Peter Higgs is a colossus of modern theoretical physics who was awarded the Nobel proze for physics in 2013 for his prediction of the presence of the ‘Higgs boson‘ – the so called ‘God particle‘ which is accredited with conferring mass on other sub-atomic particles. In my professional life I’m a  mass spectrometrist so experiments to determine the nature of mass itself are of immense interest. In order to prove Higgs’ theory, one of the biggest and most expensive scientific experiments ever devised was built at the ‘Conseil européen pour la Recherche nucléaire‘ or CERN, in Geneva, Switzerland. It’s called the ‘Large Hadron Collider‘ or LHC. The idea of a collider is that sub atomic particles (hadrons) can be crashed together at incomprehensibly huge energies to smash them into their constituent parts which can then be analysed. At the moment the theory of these elementary particles, which are the building blocks of all the matter in the known Universe, is described by the ‘Standard Model‘, but there are holes in the Model such as ‘what is dark matter?’ or ‘why is there more matter than antimatter in the Universe?’. So it’s hoped that high energy colliders such as the LHC will enable us to probe deeper into the fundamental building blocks of everything and fill the holes in the Standard Model.

In August last year I attended a conference in Geneva and one of the social events was a trip to the LHC at CERN, and that’s one of those opportunities that can’t be ignored. So, even though this isn’t ‘nature‘ as such, I hope I can justify sharing it here! 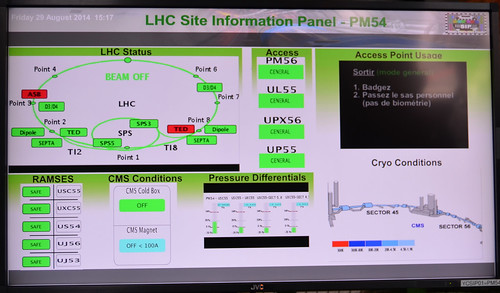 Everything about the LHC is mind boggling. It’s a circular tunnel 27km in circumference under Geneva and the Jura mountains on the Swiss/French border. It’s designed to accelerate small beams of protons in opposite directions to as close to the speed of light as possible, before colliding them inside one of four detectors around the ring. The protons are generated by stripping the electron away from hydrogen atoms leaving the free hydrogen nucleus (consisting of a single proton) to be fed into the accelerator. The collided protons eliminate each other and in the process give off collosal amounts of energy in the form of X-rays and gamma rays and sub atomic particles.

Access to the ring is only possible when the beam is turned off because of the intense radiation generated by the colliding particles. Until now the ring has only been operating at 50% power (but even at half power definitive evidence for the existence of the Higgs boson was found) and it was shutdown for an upgrade to enable it to operate at full power. After the upgrade, which was scheduled for completion at the end of 2014, there will be no access for several years whilst further experiments are underway, so I consider myself extremely fortunate to have got in to have a look. Even at half power the protons approached close to the speed of light but higher speed will give higher energy collisions and more information about the fundamental structure of matter. 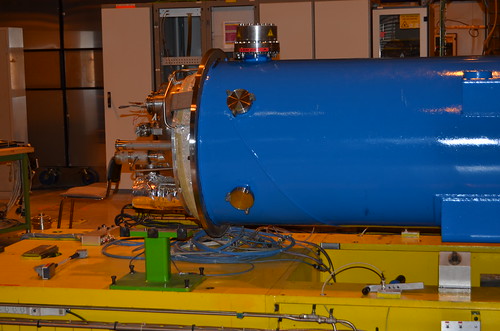 To accelerate the protons to near light speed takes a lot of circuits around the ring and I think we were told that that takes around 40 minutes. The ring itself is made up of sections approximately 30m long containing superconducting electromagnets which carry the beam line and a tube for liquid helium which cools the ring down to approximately 1-2oC above absolute zero (-273oC). At this unbelievably cold temperature (colder than outer space according to CERN) the magnets become superconducting and can accelerate and guide the contra-rotating proton beams up to collision speed. To collide the two beams, which are only a few μm in diameter, has been likened to firing two needles at each other from 10km apart with sufficient accuracy that they meet in the middle – quite a technological challenge!

The other consequence of cooling the ring down to such a low temperature is thermal contraction, and at the operating temperature of -271.3oC the 27km ring decreases in circumference by approximately 0.003% – which may not sound like much but is in reality around 80m!

There are four main detectors on the LHC called CMS, Atlas, ALICE and LHCb and the one that I was privileged enough to visit was the CMS (Compact Muon Solenoid – I can’t help but wonder if this is the compact version what a full size one would look like): 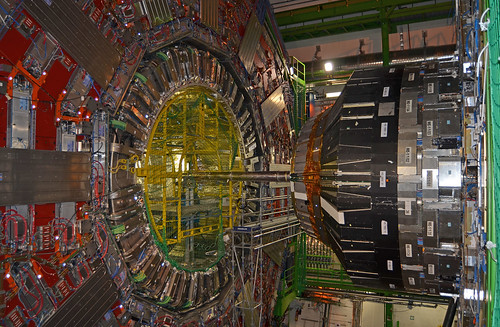 The CMS detector of the LHC. The spike in the middle carries the proton beam line

Here, the two ends of the CMS detector – which has been likened by some to the Rose Window in the Notre Dame cathedral – had been moved apart during the upgrade so all this wouldn’t normally be visible. This vast machine is approximately 21m long, 15m in diameter and weighs 12,500 tonnes. Truly gigantic – the tinyest natural phenomena are being probed by the most enormous machines! 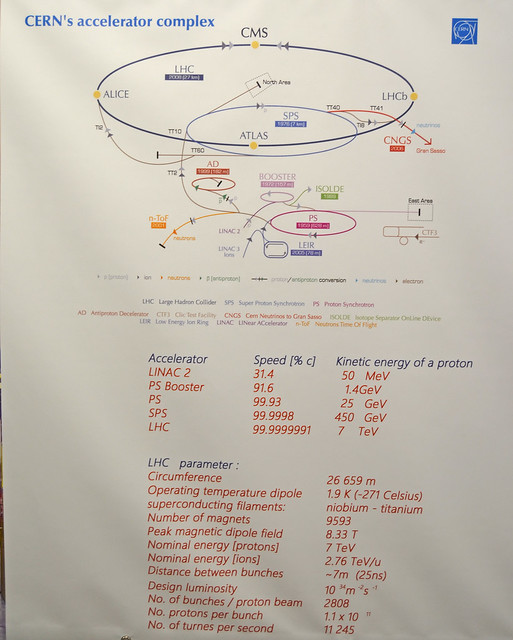 Some more brain-frying facts and figures aabout the LHC!

It can be seen from the diagram that each proton beam contains:

So an increase in velocity of 0.0001991% gives a vast increase in energy of nearly 16 fold. But 7TeV is only half power and the plan is ultimately to run the LHC at 15TeV… and the plan after that is to build another collider 100km in circumference!

It can be argued that spending the colossal amounts of money required to conduct this type of science could be better spent on for example developing solutions to climate change. But being a scientist I’m a firm believer in conducting fundamental blue sky research and CERN was concieved by one of the greatest theoretical physicists of them all, Louis de Broglie, after WW2 as a means of fostering international cooperation in fundamental physics. So as well as immense scientific and technological developments which includes the world wide web (invented by Tim Berners Lee whilst he was a scientist at CERN) I think CERN has played a key role in enabling many countries to engage with each other in an ostensibly apolitical fashion, and that could ultimately help to foster the spirit of international cooperation required to solve the other big problems.

If this interests you and you want to read more have a look at the CERN website. As you might expect it’s brim full of fascinating stuff!

9 responses to “A once in a lifetime opportunity”