Since my posting rate plummeted a couple of years ago, due mainly to the increased pressure of work, I’ve still been out and about accumulating a lot of photographs so now I’m going to try to get some of them into posts.

In early spring 2014 I found myself at Morecambe bay in Lancashire which is famous for its vast tidal mudflats that constitute a well stocked larder for a multitude of seabirds, and maximum danger for the unwary beach walker. The Irish Sea tides race in and swirl about at incredible speed and there are areas of treacherous quicksand too. 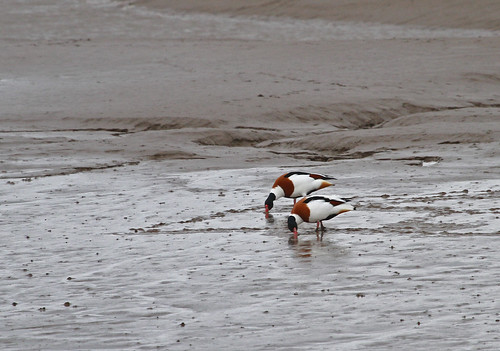 The bay is so enormous that when the tide’s out it’s not always easy to see much wildlife, but by the pier in front of the Midland Hotel there were shelduck, curlew and oystercatchers and I also caught a tantalising glimpse of a distant red breasted merganser. 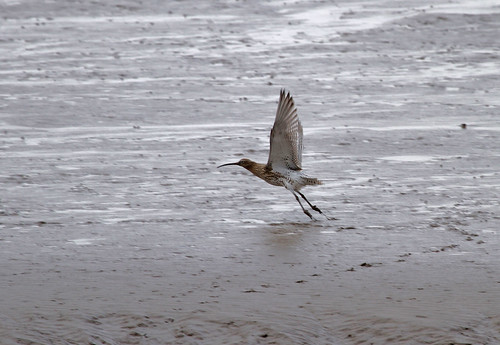 A curlew on full power for take off (Numenius arquata, Dansk: storpsove)

As I didn’t have my camera with me and I’d never succeeded in getting a picture of a merganser, I returned to the same spot very early the following morning with the relevant optics. It was the end of February and the weather was filthier than a Springbok in a ruck (which as any rugby fan will know is as dirty as it gets!) –  it was freezing cold and blowing a gale, so I sat on the ground with my back to the wind, and waited.

Despite what I said earlier, there were a good number of birds in the vicinity including curlew, shelduck, redshank and this oystercatcher who landed right in front of me and every so often he popped up into view as he mined the crevices in the rock for his breakfast. 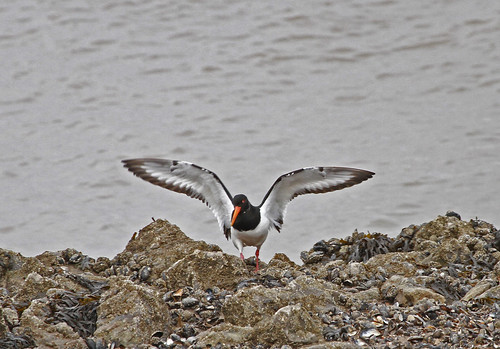 An oystercatcher (Haematopus ostralegus, Dansk: strandskade) landed close by on the rocky shoreline 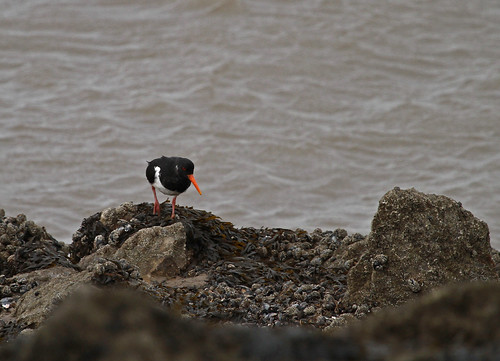 And I didn’t have to wait too long before not one, but a pair, of red breasted merganser appeared in the water just 20 or so metres away, which justified getting out early and braving the elements: 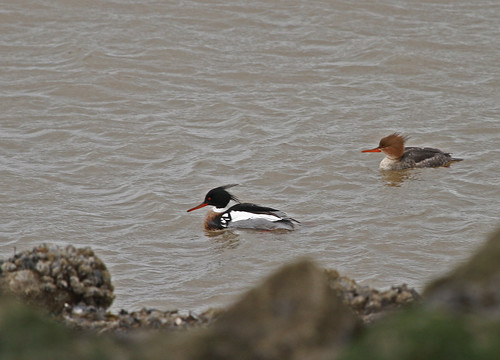 I think these are spectacular birds. They are generally resident breeders on the west coast of England and winter visitors on the east, so these were probably residents. They are one of two species of saw-toothed ducks, the other one being the goosander, which are resident in the UK. They have serrated beaks which they need to grasp their fishy prey which they can catch by chasing them under water. According to the BTO there are 2200 pairs in the UK in the summer and their conservation status in the UK is green suggesting the population is stable at least in this part of the world. The only other time I’ve seen a merganser was a month ago down on the south coast at Keyhaven, so they’re an uncommon but splendid sight!