Following on from my last post when I mentioned the changes in behaviour of the local wildlife, since then there have been more birds relaxing in the garden. There have always been wood pigeons (Columba palumbus) round and about, and for several years they’ve nested in my plum tree in the front garden, but this year, in the absence of most of the normal human intrusion, they’ve been omnipresent. There are often at least two sitting atop the garden wall just relaxing, 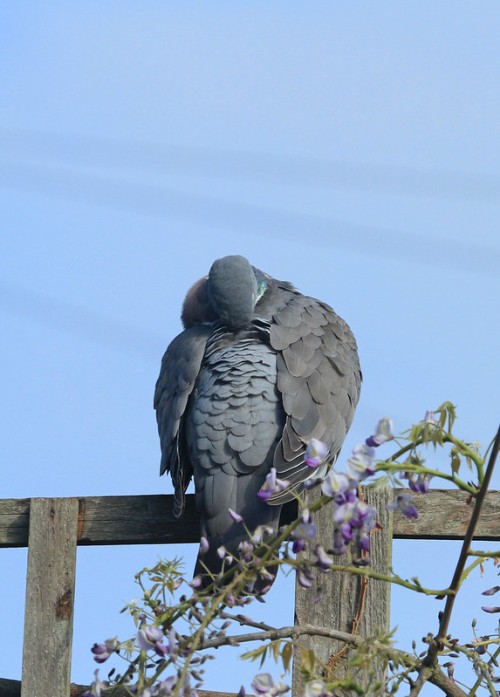 Growing on the garden wall is a wisteria, and you can see the purple flowers here. But what you can’t do is smell the flowers.

On a hot sunny day, for a couple of weeks in early May, the bracts of flowers, which are up to a metre long, fill the garden with the most intense and heavenly aroma. Interestingly though, the bees don’t seem to be that bothered by it, but I love it!

What I think are a pair of males have adopted a branch in the apple tree which they fight over – I assume they’re males, if they’re females I imagine they’d probably just take it easy and have a chat, but I guess it’s that time of year. 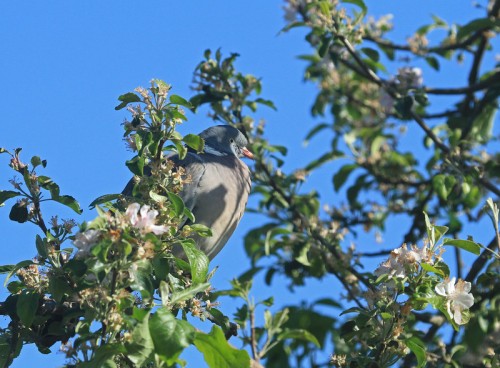 But a few days ago this one dropped down out the apple tree onto the grass and after lazily mooching about for a few minutes just hunkered down and did nothing for 20-30 minutes or so:

Cooling off on the ground, and obviously not afraid of the local cats

He wasn’t sufficiently relaxed to doze off like the dove in my last post and he stayed alert, but even so, I’ve never seen one do this before.