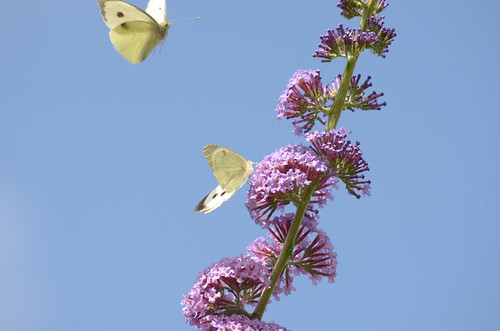 A male large white butterfly (Pieris brassicae, aka the ‘cabbage white’) zeroing in on a potential mate…

I normally try to avoid taking photographs of UK wildlife on imported garden plants, in this case buddleia, species of which grow endemically on several continents, and I believe our UK variety arrived here from the Himalayas. 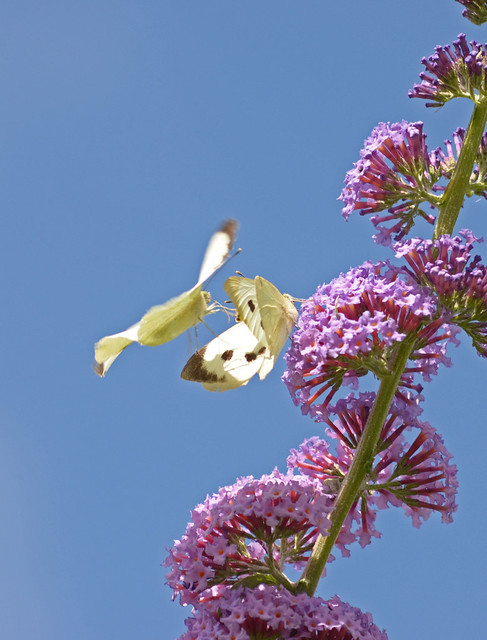 No longer anything ‘potential’ about her!

But in this instance the drama was so compelling (and I was testing out my new macro zoom that I introduced in the last post) so I decided to share this sequence. 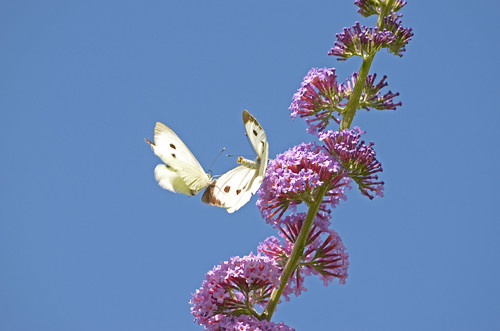 Several mating events ensued after which the male settled on a lower flowerhead to sip nectar and replenish his energy reserves: 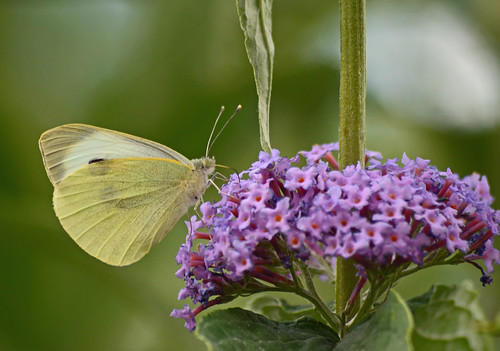 The large white, along with the small white (Pieris rapae), are known as the ‘cabbage whites‘ because they lay their eggs on members of the cabbage family and the caterpillars can do a lot of damage to cultivated cabbages. But I’m quite happy to share my cabbage allowance with them and I love to see them fluttering through my garden and along the hedgerows.

Two weekends ago whilst walking through a meadow of long grass and wild flowers such as scabius, ragwort and bramble it was immediately noticeable that butterflies are now out in force. On several outings around Histon since then many species are frequenting the hedgerows and grasslands. The species which I think heralds the onset of the butterfly summer is the gatekeeper. It always seems to be the the one I see first in June/July and is rapidly followed by the other summer species:

Holly blues were around in the spring months but have now disappeared in favour of species more associated with summer such as the common blue:

Common blue male. I think this is one of the best photographs I’ve ever taken – it’s a beautiful creature!

I particularly like commas with their ragged edges and the rich colours of a young one are exquisitely juxtaposed against the green foliage of the oak leaves.

Small tortoiseshell, peacock and red admiral regularly abound on the flowers of a huge buddleia in my garden. And whilst I’m not averse to getting up really close to snap pictures there, it’s a bit like shooting fish in a barrel, it’s a tad more challenging to get good pictures out in the countryside on some of our indigenous wild flowers:

Small tortoioseshell feeding on nectar from field scabius flower, and

I spent 20 minutes lurking in the undergrowth waiting for this red admiral to open it’s wings and when I looked down amongt the nettles I was standing in it was festooned with caterpillars:

Peacocks before pupation – the ‘ugly duckling’

And after pupation – a spectacular metamorphosis (this one is on the buddleia in my garden, but I love the colours)

A notable absentee from the rollcall of butterflies is the painted lady which was here in good numbers last summer but I haven’t a single one yet. Despite that, lots of other species are out there too, such as speckled wood, brown argus, large and small white and small skipper. But more of those next time I post about butterflies.