I’ve already grumbled in earlier posts about how the weather over the last three years leading up to 2014 was cold and unpredictable here in the UK, and how it had a very bad effect on our wildlife. In particular, overall numbers, and numbers of species, of butterflies, which are very sensitive to environmental change, seem to have been dramatically affected over those three years here in Cambridge at least.

But last year whilst on holiday on the Isle of Wight I took a walk from Shanklin up to the old WW2 radar station which is the highest point on the island, and apart from a flypast by a peregrine falcon, the most eyectaching natural phenomena were the butterflies, which seemed to be in direct contrast to the previous three years. 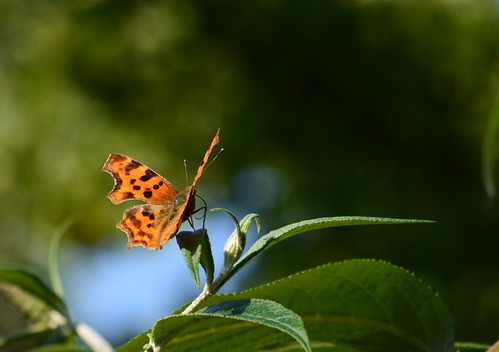 The first part of my route took me through a wooded area bound by sea cliffs on one side and farmland on the other. A huge buddleia bush overhung the pathway which was hosting numerous species of butterfly, including the comma, above, and a painted lady, of which I’d seen plenty in 2010 but virtually none in the intervening years when the weather had turned bleak. 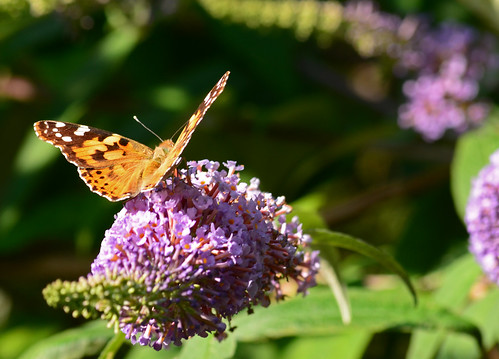 The comma is resident to the UK and in recent years its numbers and range have actually increased and this has puzzled the entomologists as it is bucking a general trend amongst all butterflies here in the UK. in contrast, the painted lady is a handsome migrant which, according to my field guide, may or may not show up in the UK, consequently the entire population depends on immigration from Africa. But that raises the question what happens to the adults that are born here?

But since my guide was published, some research has been published where populations were tracked in and out of the UK on their migration routes by radar, and it revealed that painted ladies leave the country at high altitude – 500-1000m – where they can’t be seen by eye. The application of technology is revealing many hitherto unknown phenomena about many species and it’s interesting that up until now it was thought the whole UK population of painted ladies died out each year simply because they fly back just out of visual range.  And even more amazingly, it has now been discovered that this species takes up to six generations to make a circular 14000km (9000 miles) round trip from the Arctic Circle to Sub-Saharan Africa!

Which raises another mind boggling question: how is it hard wired into this tiny creature to make successive steps of this awesome migratory feat, covering half the globe, all in the same direction, at any one time? Unbelievable! But on the other hand, if populations on a previous leg of the journey take a hit for whatever reason it may be the explanation of why population size can vary so much from year to year in the UK. 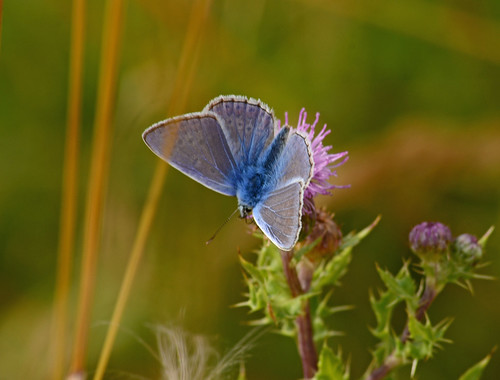 After emerging from the woods I climbed a steep incline, crossing the main Shanklin to Ventnor road and up the chalk downland of Boniface Down towards the WW2 radar station. Consequently, the terrain and the vegetation changed and so did the butterflies. The common blue is another species which I sighted frequently before the three year cold snap of 2011-14, but this male was the first one I’d spotted for a while. 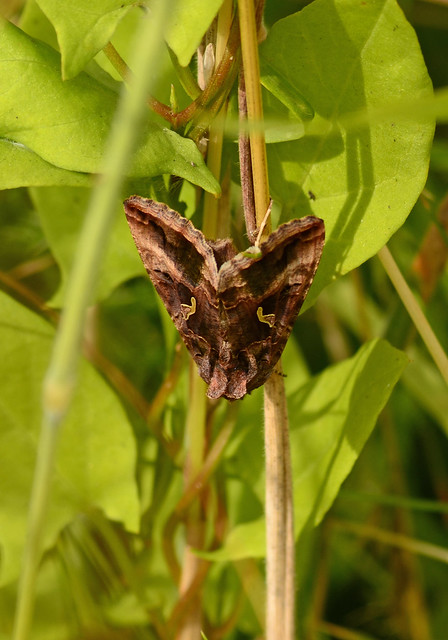 The silver Y – it’s easy to see how it got its name – is a migrant moth which isn’t peculiar to chalk downlands and can be seen in most habitats, including the farmlands here around Cambridge, and this one was soaking up the sunshine on the down. 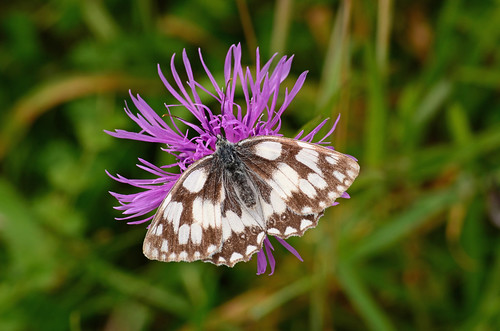 But the real gem of this trip was the marbled white, of which there were numerous examples fluttering around the down, and this one was sipping nectar from a greater knapweed flower. The marbled white is a UK resident and its favoured habitat is chalk downland.

Emerging on the top of the downland the vegetation changed to primarily low scrub consisting of acres of thistles which were home to more gatekeepers than I’ve ever seen before in one spot, I’m not exaggerating when I say there were literally hundreds of them. The information board at the entrance said that small coppers were also in residence but I only saw one and unfortunately it didn’t settle, which was a pity because they’re beautiful little brown and orange chaps and I wanted to get a photograph of one to share. Oh well, next time. 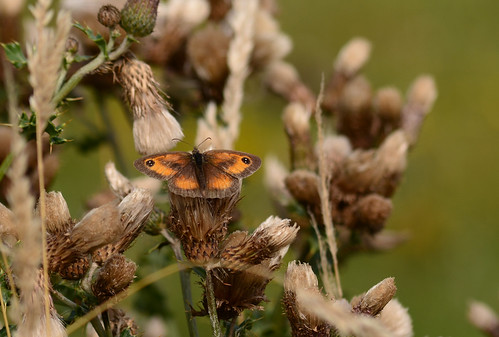 Gatekeeper – Pyronia tythonus – this one is a male, identifiable by the brown patches on the forewings, the ‘sex brands’

During the winter of 2013-14 and so far through this year the weather has warmed up, the cold, the rain and the high winds have all abated allowing many species to start to recover. It’s been a good year so far for butterflies and dragonflies, and hopefully lots more insects and the other creatures that predate them. The resilience of the natural world is astonishing, but I’m hoping we get another couple of mild years so the recovering wildlife can consolidate its numbers before the next big change in the weather.

The views from the top of Boniface Down were lovely. The cliffs on the southern edge of the island falling away to the English Channel were to the left, and when I looked north I could see mainland England. It’s not discernible in this photograph but the Solent and the south coast of the mainland are in the distance: 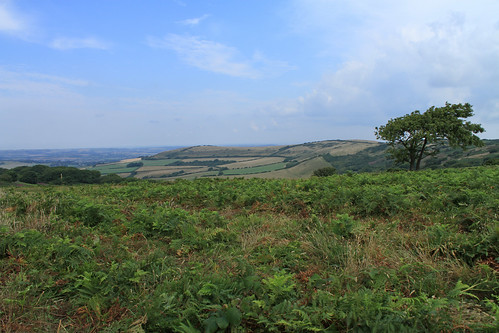 The only bird I managed to photograph up there was this little fellow who I think is a meadow pippit: 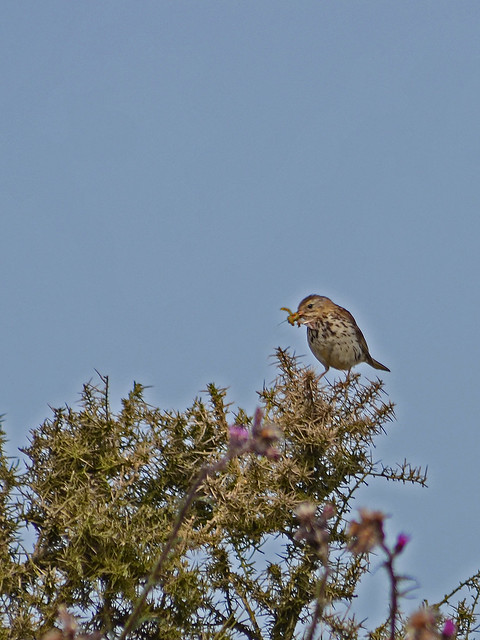 The pippits were very busy feeding youngsters, toing and froing across the scrub with beaks full of insects.

And the other reason I hiked up the hill was to see the old radar station at RAF Ventnor at the top of Boniface Down. This was one of the original installations set up before WW2 and was instrumental in detecting and reporting the massed attacks on southern England by the Luftwaffe during the Battle of Britain. 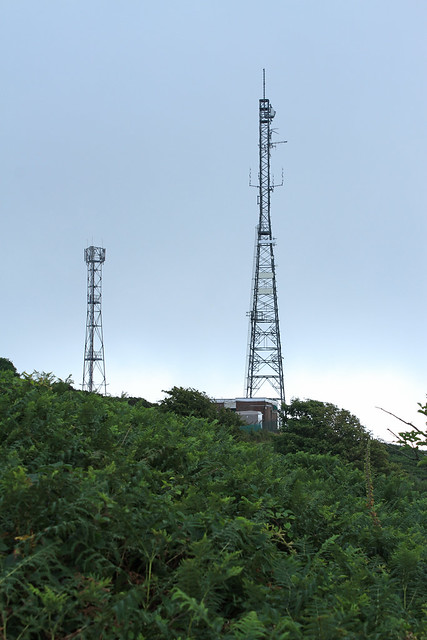 The station was twice bombed by the Luftwaffe and I believe it holds the dubious distinction of being the only radar station to be destroyed by the enemy!